HINT 4) There is a maximum number of Z Bosons you can add to a weapon. The maximum is determined by your weapon level and typically ends in zero. For example, at weapon level 90, the most Z Bosons I can have is 100. If you are at level 80, the most Z Bosons you can have is 90. At the present time the maximum level is 100 and the maximum Z Boson level is 100 (although the game has announced that they are going to level 110 soon, so we’ll have to see if the Z Boson rate also increases).

HINT 5) Once you achieve a Z Boson level of, say, 80 – the game will not allow you to lose below that 80 Boson level. I’m unsure if this holds true for lower levels as I just noticed it when I hit level 80. What this means is that once I hit 80 Z Bosons, I could use the INTERFERE button without fear of dropping down below 80. So getting to level 81 is no problem. Just keep pressing the INTERFERE button. This has also held true for level 90. So, if you can save up some power amplifiers, I suggest you use them only in going from level 88 to 89 … and/or 89 to 90 (or 78 to 79, etc.). It’s a waste to use a power amplifier to go from 70 to 71 because you know you cannot drop below level 70. HINT: There are different kinds of power amplifiers, each kind ONLY works when you have a specific number of Z Bosons already in use.

HINT 6) I try to keep my weapons all around the same Z Boson level. Notice in the screenshot below that they are all between 95 and 98. At the current time all my ships are at Z Boson level 95 or above. It took me about a week to get the level 94 weapons all to level 95. After I save up another 30-40 Z Bosons I will start to work on the level 95 Z Bosons and attempt to increase them, one at a time, to level 96.

HINT 7) I have noticed that the best way for me to use Z Bosons is to alternate between 2 weapons. In the example below I would attempt to increase the blue-circled weapon one time, then the orange-circled weapon one time. I will rotate between these two weapons until one of them reaches level 96. I will then select the one that hasn’t reached level 96, along with another weapon at level 95 (even if on a different ship) and continue to alternate.  I have found that by spreading out the “losing” interference tries over two weapons, I can generally increase one of the two weapons a bit faster (i.e. with fewer tries).

To use a Z Boson you need to:
1) Select ONE of the weapons (say the one circled in red),. When you do that the ENHANCE menu will appear.

2) Select the Z Boson icon (circled in yellow) and the INTERFERE menu will appear. INTERFERE is shown above.

HINT 1) The success ratio decreases as you gain in the number of Z Bosons on your weapons. In the screen shot above I have a 37.39% chance of successfully adding a Z Boson. That means I have a 62.61% chance of failure. The good news is that a failure not only includes LOSING one or two Z Bosons but also includes those attempts whose end result is ZERO change (no addition or deletion of Z Bosons). Fortunately, there is a greater chance of getting no change, thus you end up with a small overall chance of actually adding a Z Boson. Typically, at the 90+ Z Boson level, I need 10-20 Z Bosons to increase the overall level of a weapon by one Z Boson. HINT – make sure you have a lot of Z Bosons saved up before you attempt to change the level of a weapon. For example, at Z Boson levels in the 60’s I averaged around 5-8 Z Bosons to increase a weapon by ONE Z Boson.

HINT 2) Adding Z Bosons can be VERY frustrating. You might start out with a weapon that has 88 Z Bosons and after a couple of attempts at adding them you might end up with 80 Z Bosons, a LOSS of 8!! Try not to get frustrated. I got upset and started stabbing the INTERFERE button and accidently selected the IN USE button and LOST 6,000 credits!! (See the orange oval below.) IF you select the IN USE button and you have no power amplifiers, but you do have credits, you will spend 2,000 credits with each press of the INTERFER button!! THAT is frustrating!

Z Bosons increase the power of your ships weapons and are an integral part of the game. Z Bosons change the structure of matter in your weapons. Use them to upgrade the field level of your weapons (see screen shot below). To use a Z Boson select one of the five weapons on the FLEET page. NOTE: Three of the five weapons below have circles around them (red, blue and orange). Look at a the weapon circled in RED. 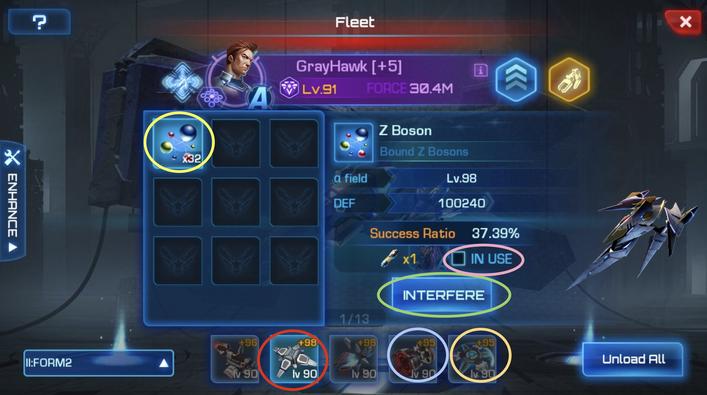 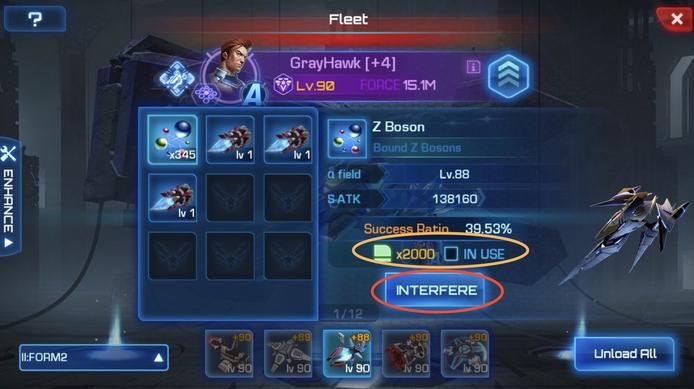 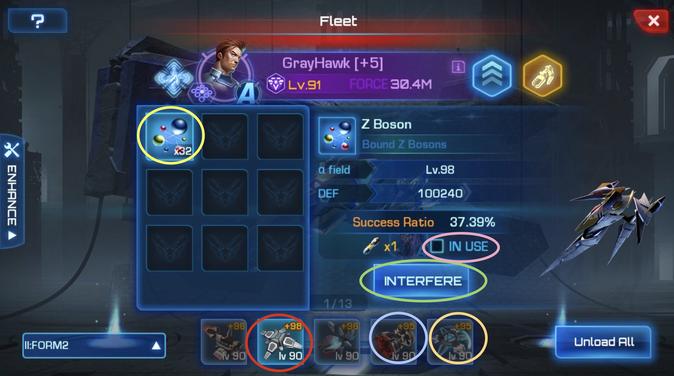 HINT 8) Z Bosons increase the power of your weapons and the overall power of your fleet. Increasing the Z Bosons helps make you stronger! Unless you are rich however, do NOT buy Z Bosons with credits. They are typically very expensive AND you will lose most of them in unsuccessful INTERFERE attempts.